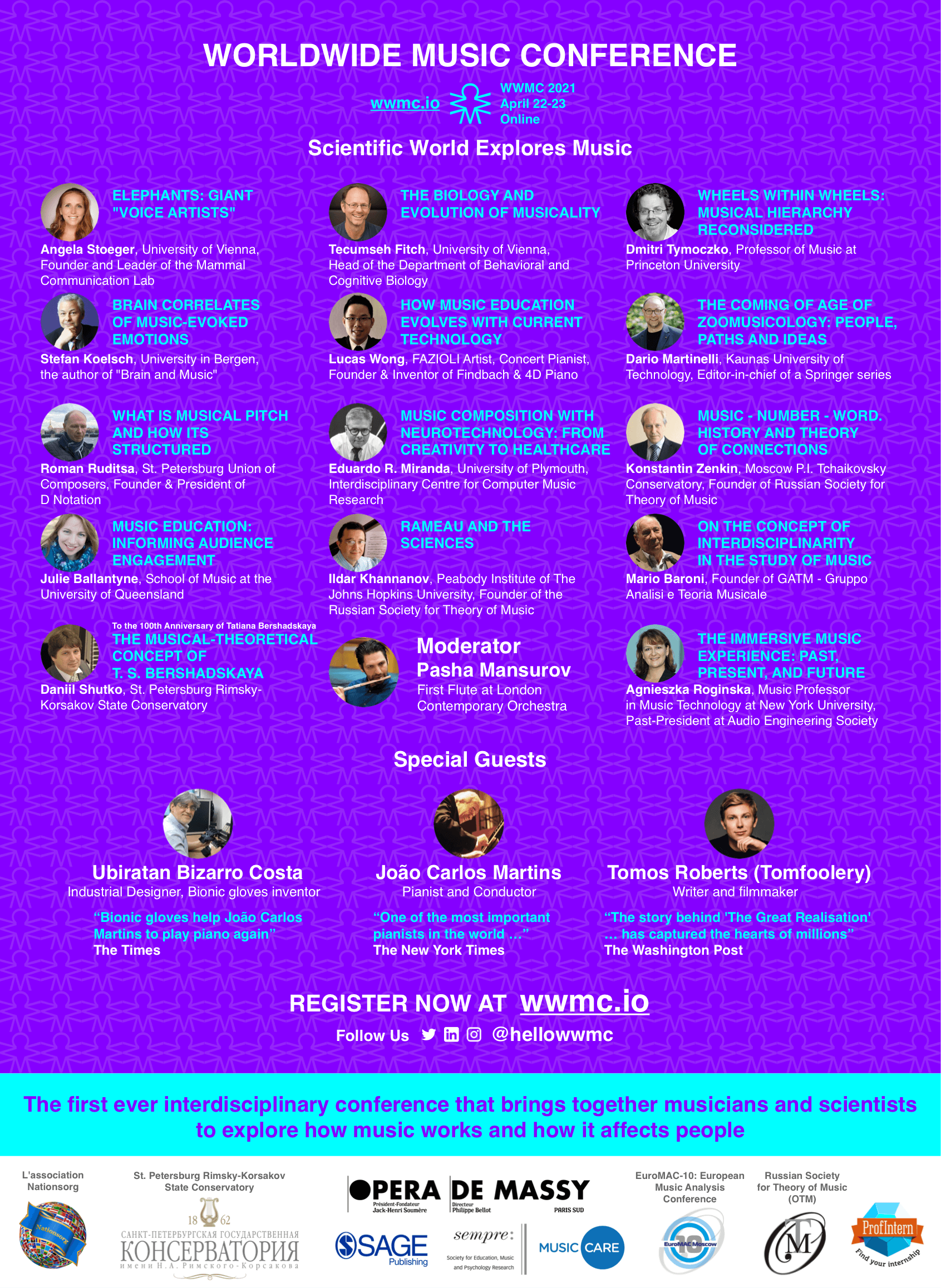 How does music work? What effects does it have on humans? The Worldwide Music Conference (WWMC) is a unique meeting in which renowned scientists meet to analyze music from different perspectives. The WWMC will also feature the participation of the virtuoso pianist and composer João Carlos Martins and the British author and YouTube influencer Tom Foolery (Tomos Roberts). Its first edition will be held online (for Covid-19 reasons) on April 22 and 23, 2021.

The WWMC is a pioneering and free event that will bring together some of the most prestigious scientific and musical minds of our time to discuss their findings and research in various fields of knowledge, such as music theory, mathematics, acoustics, technology, biology, psychology, ethnography and other disciplines.

In addition to the twelve conferences that WWMC will have, this unique meeting will feature the amazing story of Brazilian piano virtuoso and composer João Carlos Martins, who is known for being one of the most prominent Bach interpreters of our time and a symbol of resilience for many musicians. Martins battled with physical problems on his hands for 22 years, and thanks to bionic gloves invented by Brazilian industrial designer, Ubiratan Bizarro Costa, he was able to play once more in the most important concert halls in the world. Their story has inspired thousands of scientists and musicians equally and shows the importance of the bond that exists between both disciplines.

The WWMC will also feature British author and influencer Tom Foolery (Tomos Roberts), the talented 26-year-old writer who will speak about the power of reading aloud through sound and intonation. Foolery is known for being the author of The Great Realisation, a poetic masterpiece that was released back in April 2020 as a bedtime tale. The video, a YouTube hit with nearly 7 million views, addresses global issues but from a hopeful perspective, in the context of the global pandemic.

Both will join the speakers who will address the following topics:

Moreover, this will be a place where people and organizations can exchange knowledge, resources and ideas in favor of music studies. Additionally, this event will be a great opportunity for highlighting independent authors and researchers who wish to expose their findings worldwide, as the best studies will be published after being evaluated by a diverse and experienced international scientific committee composed of 17 different nationalities.

“Music is one of the most mysterious objects of cognition” said founder, speaker and WWMC Scientific Chair, Roman Ruditsa. “The closer we get to understand this object, the more obvious it becomes that the way forward can only be made by the joint efforts of many sciences. Also, the more clearly we see this knowledge contained in music, it can shed light on fundamental scientific problems.”

Who will be our keynote speakers?

About the organizing committee:

Andrey Bayadzhan studied music theory with the remarkable composer and music theorist Roman Ruditsa. They both are known for inventing “The Musical Notation Keyboard”, and for creating a mobile app for typing and learning musical notes called D Notation. Their entrepreneurship experience includes ten years in the making of several projects involving classical music. As a composer, Roman wrote cantatas, chamber, and orchestra music that have been performed in major Russian concert halls. Dr. Anastasia Kulachinskaya is a senior university lecturer, researcher, and professional scientific event organizer. Their passion for music and combined experience has brought them together to create the Worldwide Music Conference.

For further information, visit us at https://wwmc.io/